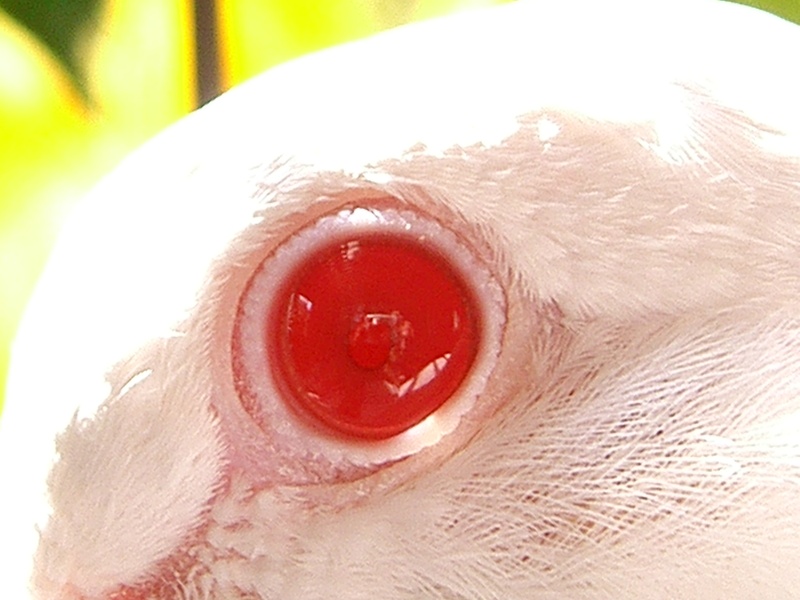 I have been breeding Blond Ivory for about 25 years now...and some of my Blond Ivory doves carry the Pied and the Rosy gene. My Blond Ivory Pied and the Light Cream Pied have red eyes...not the normal dark "Bull-Eyed" color Pied usually have. When the Sun shines on their eyes they look like an Albino. As hatchlings...they have very red eyes.

I don't think their feather color is diluted...so this may eliminate the Pink Eye Dilute? Actually...I think the colored feathers are darker on the Blond Ivory Pied and Light Ivory Cream Pied than on Blond Ivories and Light Cream Ivories.

When the Light Cream Pied Crested Silky baby first opened its’ eyes…I was surprised and confused at seeing the very red eyes. I knew the father didn’t carry White, so this eliminated the baby being White. Then I thought it may be a Mimic Snow White…but the eyes were much redder. Then…the only other mutant it can possibly be is an Albino? As the hatchling grew and developed its’ feathers I could see that it wasn’t an Albino but a Pied…a Pied with red eyes!

In 2008 I set the Light Cream Pied Crested Silky hen with a Blond Ivory cock. This cock is not banded and all I know about him is that he carries Rosy and Pied. I got him from John Schmidt. Out of this pairing I got Blond Ivory and Light Cream...I kept a Blond Ivory cock (dB// iv//iv ry// pi// cr//), band number ADA 08 4423, for my breeding program.

What is making this Pied have red eyes? Does it have something to do with the Ivory mutant? I know the Apricot and Champagne have red eyes…I used to have an Apricot Pearled that had very red eyes. I never used him for breeding, so his genes are not in any of these Pied. The Ivory mutants are my favorite...so this is very interesting to me. I have pictures of the Red-eyed Pied in the "Photo Gallery".  In the photos I took, I did not use a flash...just the sun and natural light.

This is from Dr Wilmer Miller's site...

 Red eyed-pied.  One pied from Arizona is not bull-eyed [black eyed], but is “normally” red-eyed! (?)  Progeny are being tested.

Please contact me for availability and more information  TheCoocooHouse@gmail.com